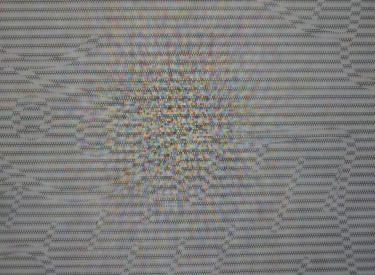 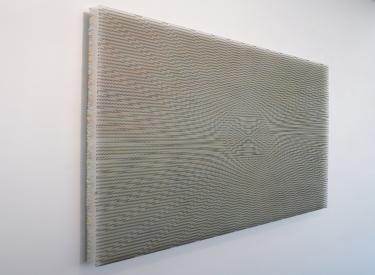 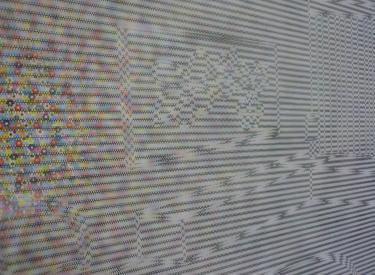 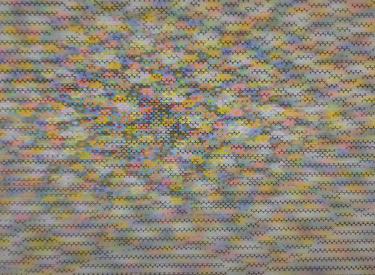 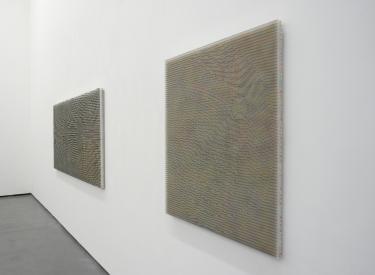 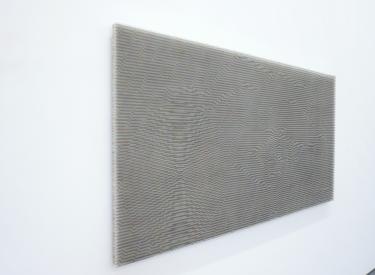 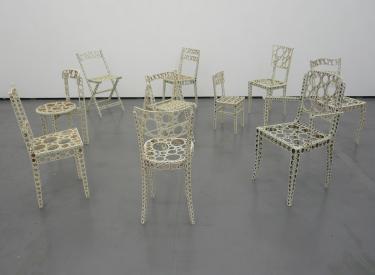 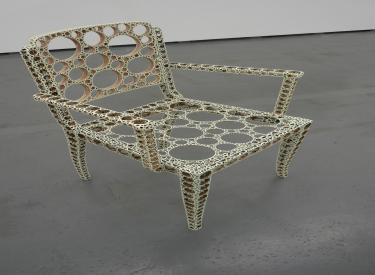 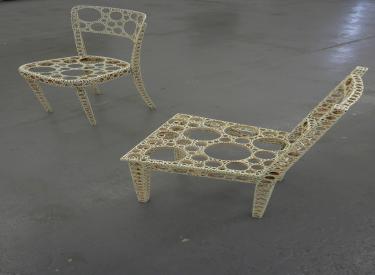 Carmen Perrin teases her own formal language out of everyday life materials creating a light, semi-transparent structure, which splits the visual process of the recipient. Her works increase our awareness towards the perception processes and open up unexpected rooms, which are built on the sensual perception.

Eclipses describe an astronomic event, in which a celestial body gets partially or totally obscured for a determined time. The artist transfers this mechanism to her work by creating Tableaus, on which more figures overlap to one and the same but remain for the observer hardly recognizable at the same time.  On the contrary, a picture can totally erase the other – as in the case of lunar and solar eclipses.

From a frontal point of view, the observer is confronted with an untellable number of small color fields, which are attached on the backside of the Polycarbonate panel. If observing the artwork from the side, the illusion generated by the pointillistic color-effect is abruptly interrupted, as a veil is fixed to the front surface of the thin wickets. Ambiguous motives can be recognized in the dark application of color and, from a content-related point of view, carry on an oscillating movement.

The different image layers mutually cancel each other making therefore the recipients aware that perception is a process that is movement dependent. The optical characteristics of the Polycarbonate make it possible for the artist to illustrate how strongly influenced is visualization by the point of view. The only significant perception of the color fields is found at the center,, while the points in the periphery merge into a vague color spectrum.

The juxtaposition of a sharp perspective and a blurry visual field, together with the changes between the image levels, offer a strong attraction to the viewer and tempt them to continuously experience the artwork from a different perspective. Carmen Perrin succeeds in the active involvement of the viewer in her extensive installations, such as the accessible passage of the Zürcher Airport, as well as in smaller formats.

The perforated wooden chairs represent an eclipse in the figurative sense: through her intervention, the artist hides the original purpose of the objects. The artist perforates the chairs as much as possible, while still guaranteeing their stability. For Perrin, the spatial structure of the perforated chairs turns into a porous space constructed as a sponge. The solid objects become vessels, which encompass the emptiness. As in the sense of an eclipse, the material’s original quality is covered and transformed into its contrary.