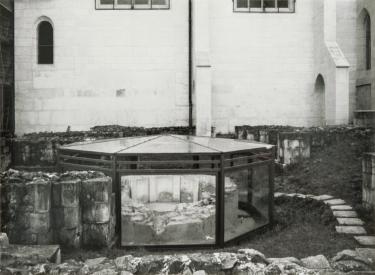 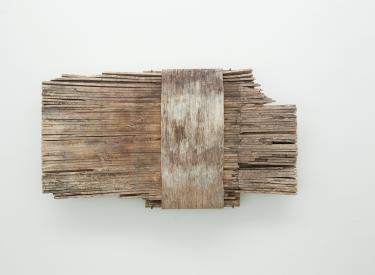 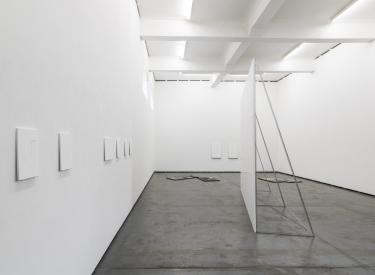 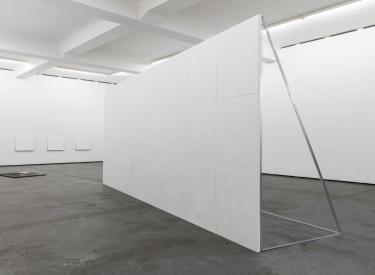 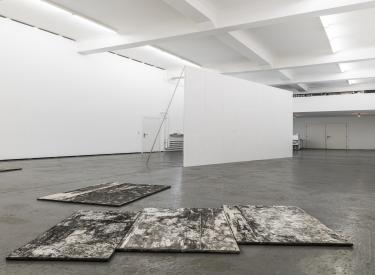 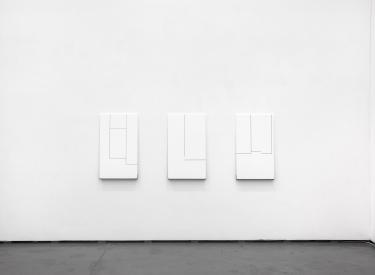 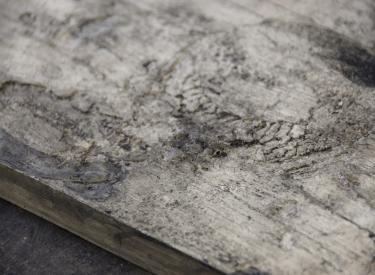 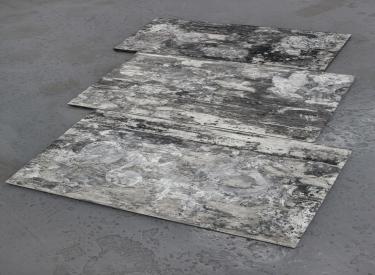 The dominant feature in the gallery is a freestanding wall of upright rectangular styrofoam modules. A support structure of thin aluminium rods has been left exposed on one side, while the other presents a perfectly smooth film of plaster that reflects light in varying degrees of brightness and lustre, the result of an imperfectly cleaned acrylic mould. The wall is both an image and a temporary architectural entity. Revealing its own production process, it also raises issues of spatial context.

On the floor, groups of speckled grey panels have been arranged, negative casts of the former work surfaces covered by material deposits. Documents of past activities, the panels also constitute physical objects in their own right. While their original function is reaffirmed by the horizontal presentation, depressions and fissures in their ‹skins› evoke imaginary landscapes, a subtle record of absent work and past appropriation processes.

A photograph bridges the gap between the wall and the panels on the floor. ‹Auxiliaire› addresses the subject of architectural structures whose purpose it is to present or support objects and to guide the spectator’s gaze. The photograph also explores the ‹archaeology› of the casts on the floor and their inherent blanks and voids.

Most of Sturzenegger’s earlier works were on paper, and the lines in her drawings ephemeral, exploratory, palimpsest-like. Recently, the artist has discarded paper in favour of cast plaster and her focus has shifted to the physical and sculptural qualities of the new carrier medium, to the relationship between architectural structures and to the void that reveals itself in the act of display.

Miriam Sturzenegger’s new graphite sketches are drawn on small rectangular plaster panels that lean against the wall. Despite the artist’s light touch, the lines in these ‹spatial essays› are unexpectedly clear. We look forward to welcoming you to this exhibition!